Courtney Love reacts to news of her connection to Jeffrey Epstein.

Anyone who is a longtime fan of legendary Hollywood hardrockers Hole and the band’s enigmatic frontwoman Courtney Love knows that trouble seems to find the singer wherever she goes, even when she’s been hiding low these past few years.

Over the last two decades, Love’s many feuds, fights, and the strategic flinging of a purse to infamously disrupt a high-profile 1995 Madonna interview have kept her in the headlines almost as much as Hole’s hit songs have. It’s no wonder why, without confirmation from famous friend Michael Stipe, Love has publicly theorized that r.e.m.‘s classic alt-rock song “Crush with Eyeliner” is about her, even though the tune’s protagonist equates his crush to “three miles of bad road.” 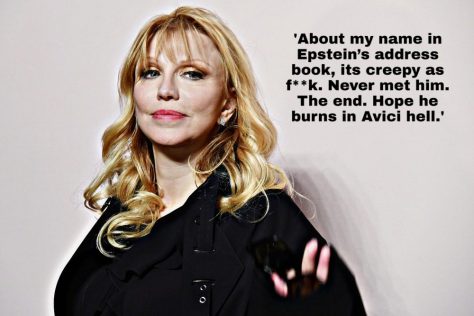 And now, that road has led to the top of the headlines once again after the news media revealed that Love’s name is included in late convicted pedophile Jeffrey Epstein‘s little black book.

“About my name in Epstein’s address book,” said Love earlier this week via Twitter, “it’s creepy as f**k that I’m in that thing, I agree. I didn’t know him, never met him, didn’t know who he was. Apparently he collected celebrity phone numbers. The end. Hope he burns in Avici hell.”

Hey . About my name in Epstein’s address book , it’s creepy as fuck that I’m in that thing I agree. I didn’t know him , never met him , didn’t know who he was. Apparently he collected celebrity phone numbers. The end . Hope he burns in Avīci hell. https://t.co/ntgu2BpNy1

Somewhere in England, Prince Andrew must be hsving a sigh of relief that his involvement was ricjed from global headlines by Love, at least fir this week.

If we had Courtney’s phone number, we’d dial her up and beg her to save modern music with a new Hole or solo album!