Step aside, Batman! The Who, Pink Floyd, Elvis Presley, and other music icons have rocked their way into W/B’s legendary Hollywood history.

Living in SoCal, it’s easy to get jaded when it comes to being starstruck. After all, when you randomly spot Smokey Robinson at the supermarket and Steven Tyler at Coffee Bean—which I have—you tend to get used to seeing superstars as much as you see smog and palm trees.

However, a recent tour of Warner Bros. studios had us feeling excited about the magic of Hollywood once again. And that reinvigorated awe had everything to do with the rock and roll history that lies within the eclectic tour that covers every iconic entertainment offering from Rebel Without a Cause and East of Eden to Friends and the DC universe’s current crop of superhero hits like Batman and Wonder Woman.

Along with all of the movie history, the studio’s backlot has a rich music history, too, including as the location of the iconic cover photo of Pink Floyd‘s 1975 album, Wish You Were Here.

Equally cool was spotting one of the rockin’ motor scooters from The Who’s 1979 classic film Quadraphonia.

The Lambretta and Vespa Italian motor scooters make a memorable appearance in the British drama as the ride of choice for Sting and his Mods as well as their rivals the Rockers.

Many classic Hollywood musicals and music-oriented movies have also been filmed on the lot, from The Music Man and A Star Is Born (two of them, the 1976 and 2018 versions) to Elvis and Selena.

The other king, the King of Pop also has an unforgettable attachment to W/B’s history. Michael Jackson and The Jacksons filmed one of their famous Eighties-era Pepsi commercials on the Warner Bros. backlot. This one was filmed on the backlot’s all-American “Hennessy Street” and co-starred a very young Alfonso Ribeiro.

Lady Gaga and Bradley Cooper’s guitar picks and guitar strap are on display alongside costumes and rock paraphernalia from 2018’s A Star Is Born.

Some of the other rockin’ relics that we came across include the original piano from the 1943 classic film Casablanca. The piano is the one Humphrey Bogart was referring to when he famously said, “Play it again, Sam.”

The studio’s rock and roll holy grail may be the old jukebox used in the 1957 Elvis Presley film Loving You, which featured The King using this jukebox to supply the music as he sang “Loving You” in the technicolor movie musical.

Phoebe Buffay’s (Lisa Kudrow) acoustic Gibson guitar has a place amongst pop culture and entertainment history, too, and is behind glass as part of the W/B tour. It’s virtually impossible to walk past the six-string without “Smelly Cat” popping into your cabeza.

Another, ahem, thrilling moment was seeing legendary record producer Quincy Jones represented for his work with Steven Spielberg on the two-time Oscar nominated soundtrack to the 1975 film The Color Purple.

Random acoustic and electric guitars, violins, cellos, bajos, congas, and dozens of other instruments line the walls of the airplane hanger-sized prop room.

The instruments have been used and reused in countless W/B movies and TV shows.

Let’s see, Pink Floyd…Elvis Presley…The Who…Michael Jackson…James Dean…when a studio’s history includes this much badass talent, we can almost forgive the W/B for The Gilmore Girls. 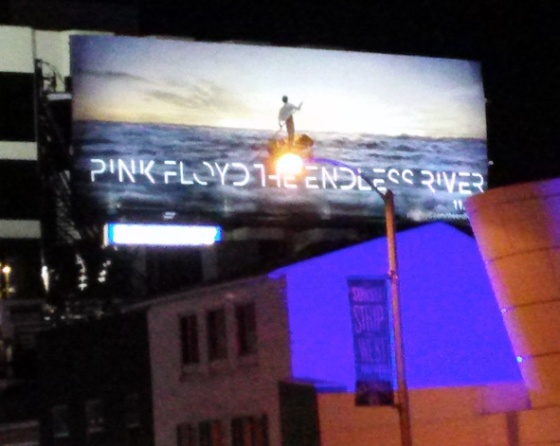 When it came time to announce an historic rock release, Pink Floyd went right to the source where rock ‘n’ roll is always alive and well: The Sunset Strip.

A huge billboard announcing Pink Floyd’s (kinda) new album, The Endless River, overlooks the world-famous boulevard from atop local landmark Book Soup. The colorful ad, which hit the strip earlier this week, is hyping the iconic British band’s fifteenth release, which is due out November 10 and is primarily leftover instrumental tracks from Floyd’s 1994 album, The Division Bell.

Check out David Gilmour and Nick Mason discussing The Endless River below.

ANOTHER BRICK IN THE WALL PART 4

Gotta give props to the clever prog-rock fan that jazzed up this jalopy by transforming it into a mobile salute to Pink Floyd and the legendary Brit band’s iconic 11th album. We spotted the cool cruiser in West Hollywood.