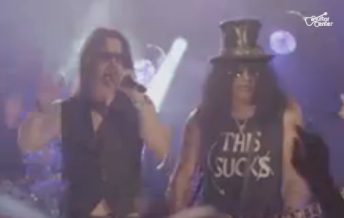 Guitar Center has just released a badass sneak-peek at the upcoming Slash with Myles Kennedy & The Conspirators concert set to premiere on DIRECTV on November 7.

Taped at the Roxy on September 25, the clip features the rockers performing a scorching cover of Guns N’ Roses‘ “Nightrain.” Contrary to Slash’s shirt, the number definitely does not suck!

Legendary GN’R alum and Sunset Strip rock refugee Slash is heading back to West Hollywood and Rock Row in September to shred at three of the city’s most iconic rock clubs: Troubadour, Roxy and The Whisky A Go Go. The three-night mini-tour will have Slash reuniting with his SSMF 2010 guest artist, occasional studio collaborator and frequent touring mate, Myles Kennedy and his band Myles Kennedy and the Conspirators.

The band will first head over to Santa Monica Boulevard and Doheny and hit up the iconic Troubadour on September 23 for a headlining gig before cruising up to Sunset on September 25 to rock the Roxy. The party continues on September 26, when Slash and Myles Kennedy and the Conspirators take center stage at the world-famous Whisky A Go Go.

Get tickets and additional details here. See you at the shows!