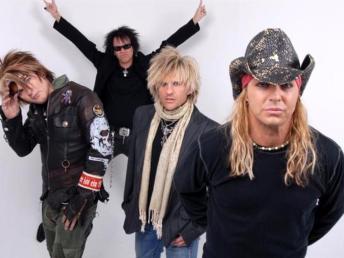 Metal fans looking for nothin’ but a good time won’t have to wait too much longer now that Poison has announced that the Sunset Strip-launched legends will be hitting the road again next year.

“It looks like it will happen [in 2015],” Bret Michaels recently confirmed to Cleveland Scene. “It’s been a few years. We just want to put together the right package and show to celebrate with everyone.”

The legendary P.O.F.D. himself is returning to reality television for new episodes of The Osbournes, which will find Ozzy Osbourne and the fam — Kelly, Jack and Sharon — giving fans another peek into their lives a decade after the hit show ended its run on MTV. This time around, The Osbournes will include, according to Sharon Osbourne, eight new episodes and will debut on VH-1 in early 2015. 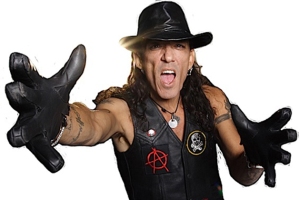 Sunset Strip legend and former Ratt frontman Stephen Pearcy is following up his recent headlining gig at the Whisky A Go Go with the release of his fourth scorching solo album, Smash, due out in early 2015. 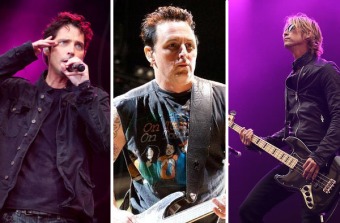 The band, which is reportedly planning a new album, will be taking the stage with the Seattle Symphony Orchestra as part of SSO’s “Sonic Evolution” showcase. The once-in-a-lifetime concert will also feature works inspired by Nirvana and Pearl Jam, along with the world-premiere of McCready’s decidedly less grungy orchestral composition “Waking the Horizon.”

“I’m pretty convinced that 90% of the record is actually written; it’s just gotta be kind of assembled between all those riffs,” Metallica drummer Lars Ulrich revealed to Metal Zone last summer. “It’s just a matter of connecting this to this and sort of shaping it into a song. And so, I’m pretty psyched about that.”

In September, frontman James Hetfield (pictured) confirmed the long-awaited album’s progress, telling Pulse of Radio: “We’ve come up with enough material for a record, for sure…We just haven’t had the time to really focus on it and…start whittling at these masterpieces.” 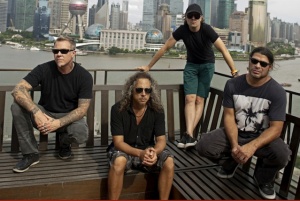 “We’re just blueprinting everything right now,” said Truillo. “There are a lot of ideas, a lot of song bodies, you gotta go through the process. For me personally I’m really excited about what we’ve been able to jam out.”

The band has promised fans that they’ll be hearing Metallica’s tenth studio album by as early as 2015 and no later than 2016.

L.A. metalheads BulletBoys are bringing the band’s awesome hard rock hits like “Smooth Up in Ya,” “Hard as a Rock,” the killer cover “For the Love of Money” and “Freakshow” to the Whisky A Go Go on March 19!

Frontman Marq Torien and most of the band’s founding lineup are still cranking out killer original rock jams, like the stellar “Symphony” from BB’s upcoming release Elefante. Get ticket details here.

7. SYSTEM OF A DOWN GETTING ‘SOUL’-FUL AT FORUM 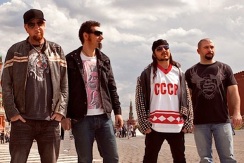 SoCal superstars System of a Down are set to headline another hometown show in the new year, when they will rock Inglewood on April 6, bringing the band’s “Wake Up the Souls Tour” to the Forum.

8. ROCKING OUT TO A NEW KISS ALBUM

“I recently wrote a new song called ‘Your Wish is My Command,’ so the process has already started,” revealed Gene Simmons about the upcoming follow-up to 2012’s Monster.

Shock rocker and antichrist superstar Marilyn Manson will be returning to the spotlight in 2015 to rock your face off with his ninth studio album, The Pale Emperor, which drops January 20. If the album’s kick-off single “Third Day of a Seven-Day Binge” is any indication of the weight of the new material, Pale Emperor is going to be stellar.

A day after the album drops, Manson will launch “The Hell Not Hallelujah Tour,” which snakes its way through the U.S. starting in Washington, D.C. on January 21 and ending in Vegas on February 14. The singer-songwriter will then head overseas to rock a few summer festivals. Unfortunately, Manson has not announced an L.A. date.

Los Angeles bands Buckcherry (right) and Zakk Wylde’s Black Label Society along with Limp Bizkit, P.O.D. and Filter lead a rockin’ roster of awesome acts that will be hitting the high seas February 2-6 as the star attractions of ShipRocked: The Ultimate Rock N’ Roll Cruise.

Sailing from Florida to the Bahamas and back, ShipRocked will also showcase the super-band Metal Allegiance, which includes current and former members of legendary metal bands Megadeth, Anthrax, Pantera, Testament and Dream Theatre. 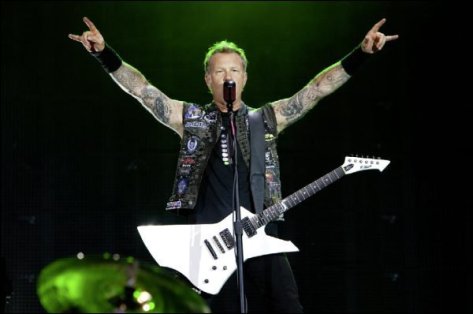 When Ozzy Osbourne proclaimed in 1982 that “you can’t kill rock and roll,” he and fellow enduring metal icons like Metallica, Motley Crue and KISS have gone on to prove that notion over and over again by keeping arenas packed and the charts rocking decades after first plugging in their amps.

Rockin’ and rollin’ all night and partying every day are only a few of the enviable rewards of rock superstardom, which for some bands, ahem, Quiet Riot, often ends as quickly as it begins. Or, once-iconic groups continue to carry the torch, but in name only, such as the current incarnation of Axl Rose‘s Guns N’ Roses and the Sebastian Bach-less Skid Row.

But that’s not the case with the monsters of metal below that are as relevant today as they were back when your favorite guitarists wore mascara and had big, poofy hair.

Launched in Hollywood, California in 1981, Metallica has survived the death of original bassist Cliff Burton, image controversy and an infamous battle with Napster only to come out on top over 30 years later as the reigning kings of metal.

James Hetfield and the band have revealed that Metallica is working on a new album for a possible 2015 release. Lars Ulrich recently confirmed to Rolling Stone that the project is in the “fourth inning.”

In the Motley Crue classic “Kickstart My Heart,” when frontman Vince Neil sang, “When we started this band all we needed, needed was a laugh. Years gone by, I’d say we’ve kicked some ass,” he wasn’t kidding! Since forming in 1981, the Bad Boys of Hollywood have become one of the biggest-selling American rock bands in history, selling over 80 million albums worldwide. Crue is currently rocking the planet on its farewell tour that makes a stop at Hollywood Bowl on July 21. 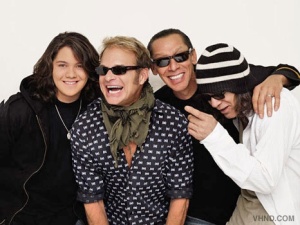 Surviving three incarnations of the band and years of behind-the-scenes boozy brawls, health scares, rocky on/off reunions and personality clashes, the near-original lineup of Van Halen, fronted by David Lee Roth, continues to rock arenas and the charts — minus bassist Michael Anthony, who has been replaced by Eddie’s son, Wolfgang Van Halen. In April 2014, on his podcast The Roth Show, the singer teased about currently “working on a great Van Halen project.”

In 1973, Gene Simmons, Paul Stanley, Ace Frehley and Peter Criss put on makeup, plugged in their gear and changed rock ‘n’ roll forever, becoming the most iconic and recognizable band in the world. Since then, KISS has endured lineup changes and short-lived reunions to become a certified pop culture institution. The ever-touring rockers recently launched an arena football team, L.A. KISS, and are currently moonlighting as models for fashion designer John Varvatos. 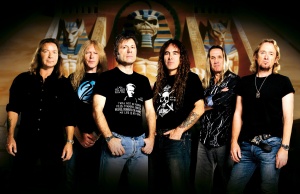 Formed in the mid-Seventies, British metal masters Iron Maiden had almost as many different band members as Spinal Tap had exploding drummers. But when Bruce Dickinson joined in 1981, the band released one future classic after another, with “Number of the Beast” and “Run to the Hills” becoming Maiden’s signature songs. Still packing arenas on its 2012-2014 Maiden England World Tour, Dickinson and crew also recently headlined Europe’s Monsters of Rock fest at Castle Donington for a fifth time.

Sure, Britain’s Judas Priest had other frontmen throughout its career, but only Rob Halford really matters.

The on-again/off-again singer has been back with Priest since the early 2000s, and band tells Rolling Stone that their Summer 2014 release, Redeemer of Souls, is going to be a “very heavy record.” 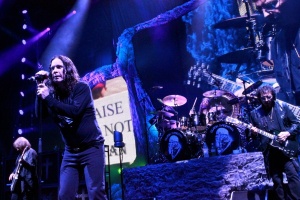 Black Sabbath, which formed in England in 1968 and has had various famous lead singers, has regrouped again with original frontman Ozzy Osbourne in 2011. Since then, Sabbath has been rocking the world on a global tour, and the charts with the band’s latest album, 13. 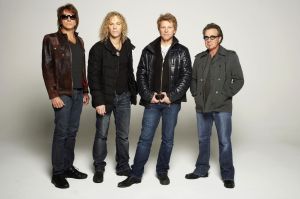 Sure, Richie Sambora may be M.I.A., but with Jon Bon Jovi at the mic, Bon Jovi will undoubtedly continue to rock a million faces with sold-out arena shows. Rumors are swirling that Sambora is looking to step back into the band soon, and that’s awesome news, but his sudden departure didn’t damper the success of Bon Jovi’s 2013 Because We Can: The Tour, which proves the iconic band’s superstar success has come near to piquing just yet, not even after 30 years as the best American rock band on the planet.

Powerhouse arena rockers Def Leppard lit the world on fire in 1983 with the British band’s third album, Pyromania. Instant rock classics like “Foolin’,” “Photograph” and “Rock of Ages” remain among Leppard’s concert staples, including on the band’s 2014 summer tour with KISS. 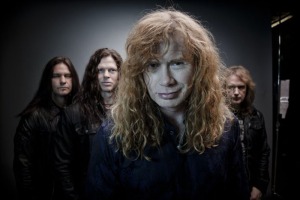 Legendary Hollywood thrash band Megadeth was launched in 1983 after frontman Dave Mustaine had a falling out with his former band, Metallica. Mustaine has since ended his feud and continues to keep Megadeth on the charts and selling out arenas alongside ’Tallica. Megadeth is currently in the studio working on the follow up to 2013’s Super Collider, which hit No. 6 the Billboard 200 albums chart.

Southern California rockers Slayer have been bringing their brash brand of thrash metal to the masses since 1981, and the band shows no signs of slowing down anytime soon. In Spring 2014, Slayer debuted a new single, “Implode,” and announced that a new album is due in 2015.

Anthrax put NYC’s thrash metal scene on the map in 1981 and went on to release countless hard rock hits, including “Bring the Noise,” “Indians,” “Antisocial” and, from 2011’s Worship Music, the 2012 single “I’m Alive.” Anthrax is currently touring and working on a new album to be released in Summer 2014.