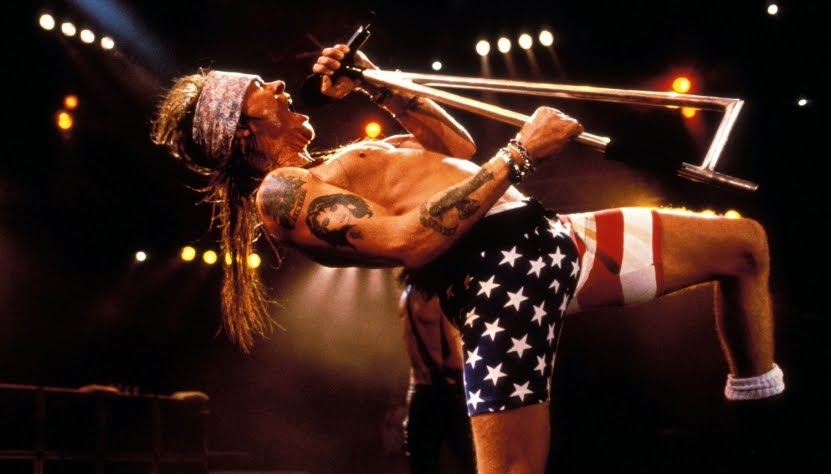 Use Your Illusion I and II, the Nineties-era hard rock masterpieces by Sunset Strip-launched legends Guns n’ Roses, have resurfaced on Rock Row in the guise of some rockin’ huge posters plastered on random construction site walls located between the Whisky and the Rainbow.

So, what gives with the rockin’ retro rewind?

Turns out, the GN’R posters are hyping the release of a new deluxe box set of the two albums that somehow expanded to eight discs of related material in a set that costs over $200.

Coinciding with the launch of the box set is the unveiling of a new Use Your Illusion II mural located on the Roxy‘s sidewall and overlooking the Rainbow’s outdoor patio.

Guns n’ Roses diehards will recognize the location of the mural as the area where Axl Rose stared down Arnold Schwarzenegger in the 1991 video for Use Your Illusion II‘s smash hit “You Could Be Mine.”

Mark Kostabi‘s iconic cover artwork–a manipulation of part of Rafael‘s “School of Athens” mural–takes up a large section of the wall and is a welcome dose of rock and roll spirit that has been missing from the Sunset Strip for a while now. Let’s hope the new GN’R mural is a permanent part of the Strip.