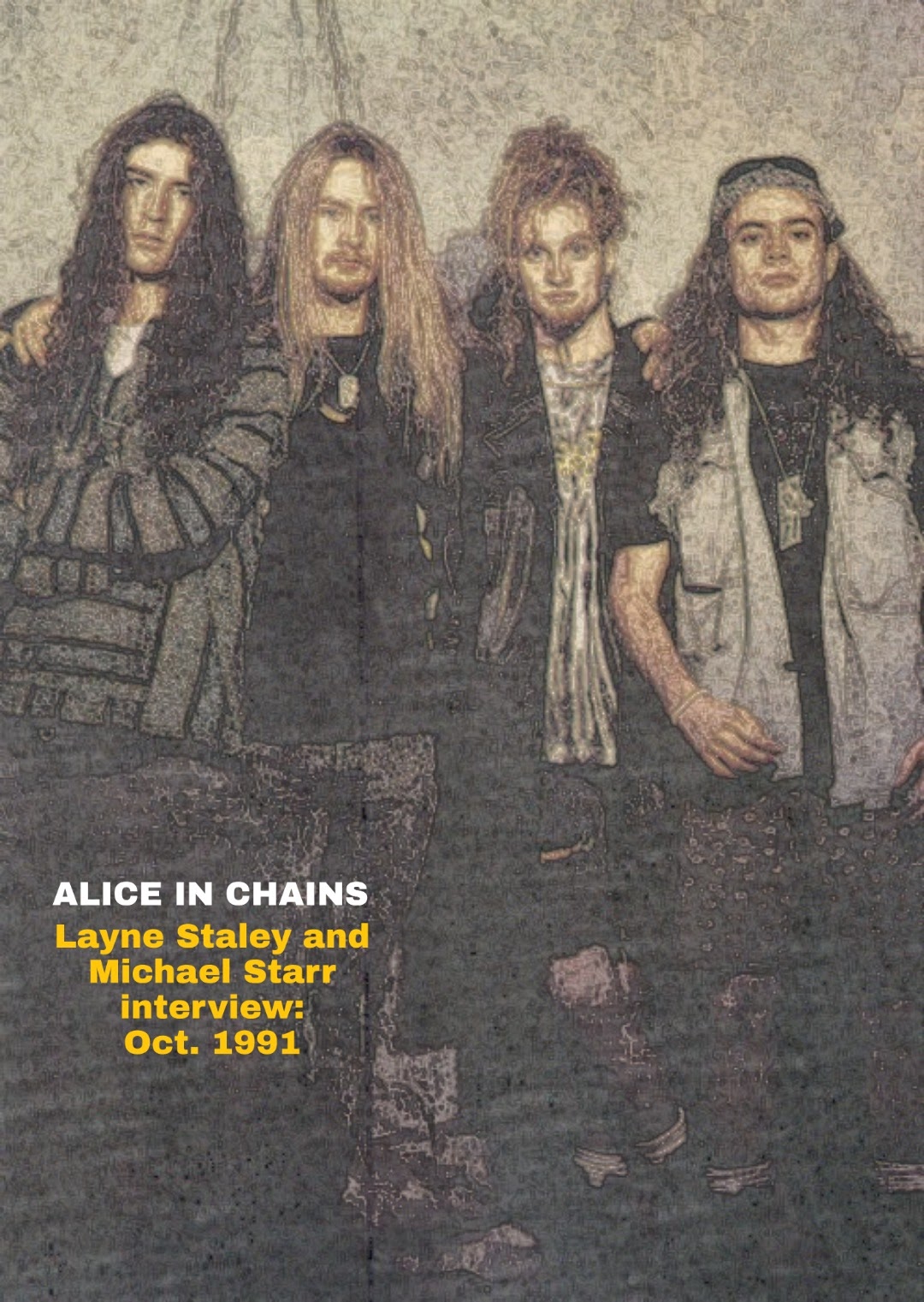 *To celebrate the 30th anniversary of Alice in Chains’ Facelift, which was released in August 1990, here’s a reprint of an interview that I did in October 1991 with Layne Staley and Michael Starr…

Walking into Alice in Chains’ tour bus feels a bit like entering into a scene from This is Spinal Tap.

A half-conscious groupie grabs her purse and combat boots and politely excuses herself as she exits.

A few quiet moments pass before two members of the band enter the alcove at the rear of the bus.

Looking a bit dazed and confused, the pair make themselves comfortable as they stretch out on the only two cots in the room.

From their appearance, one can guess that they’ve slept in the very clothes they’re wearing. Incidentally, this is the same attire they will wear tonight when they perform before 15,000 fans in Buffalo Memorial Auditorium.

For being members of one of America’s premiere hardcore-alternative bands, the pair look rather tame. Bassist Michael Starr is donned in standard thrash metal fashion: t-shirt, shorts, and combat boots. Frontman Layne Staley is shoeless and dressed in ripped jeans, t-shirt, and has his head wrapped in a bandana and his beard spun into a braid.

The interview starts much later than scheduled. It is now 5:15 p.m. and Starr mentions between drags on his cigarette that he just woke up a few moments ago. This explains his glassy-eyed stare and lethargic manner. On the other hand, Layne seems wired and interjects that the reason they slept so late is because they just drove in from doing a show last night in Erie, Indiana. (*sic. He meant Erie, Pennsylvania.)

For the most part, Starr and Staley seem relatively free of the Hollywood attitude most up-and-coming rock stars acquire upon hearing that their debut album, Facelift, recently reached sales of 600,000, and their current video is in heavy rotation on MTV’s Most Wanted program.

Alice. Where did the name come from?

Layne Staley: Well, it was our pet goat, before it died. We used to get drunk, chain it up to a fence and f*** it.

You guys are from Seattle, right? Obviously, you and Queensryche are the biggest things out of there. And Soundgarden, I think, and Mudhoney’s from there, too.

When and where did you guys first meet?

Michael Starr: After high school, I guess. Going to the beach, whatever. Seattle’s a pretty small town. It’s a big town, but it’s just…

Michael Starr: A small scene. Everybody that plays an instrument, you know of them.

How long did you guys make the rounds before you hooked up in Alice in Chains?

Michael Starr: Six, seven years, off and on.

Did you guys make it straight out of Seattle, or did you consider going to L.A., New York…

Layne Staley : We just try to be a great Seattle band.

Is Seattle still home to you guys?

What did you guys actually do for money while you were waiting for your big break?

Layne Staley: I prostituted myself to old men.

Michael Starr: Nothing. We were broke. We didn’t do s***.

Layne Staley: Yeah. We sold drugs once in a while. Then we’d go broke and the other guys would sell drugs. Actually, we didn’t do anything. We’d open the doors at our rehearsal hall. That’s how we got our room. We lived in our room. We scrounged up change…

Michael Star: We stole money from candy machines. And the cigarette machines.

And how long was this lifestyle going on?

Michael Starr: It is kind of scenic. At first I was wide awake, looking at everything. Now that this is our sixth U.S. tour, this time around the U.S., it’s getting old.

You guys do you seem to be on the road a lot lately. You were just on the…

Now that you’re off that tour, what was Megadeth like?

Michael Starr: All the guys were all really cool. Dave Mustaine was way down to Earth and cool and took us to go skydiving. He’s a really nice guy and a great guitarist. I couldn’t believe how nice he was to all of us after all the things I had heard. He’s off drugs and everything now. Slayer’s great guys, too. We hung out with them all the time, and they’re always giving us an award or we’re giving them an award or stuff like that. They’re a bunch of cool guys.

What do you consider the music on Facelift: hardcore, alternative, heavy metal?

Layne Staley: I don’t know… it’s not mainstream because it doesn’t follow any certain pattern and it can’t be described as a final thing. We just do whatever. If we want a song that’s got some funk in it, we do that, or if it’s got a Metallica riff, we put that in a song. We’re hard to follow. 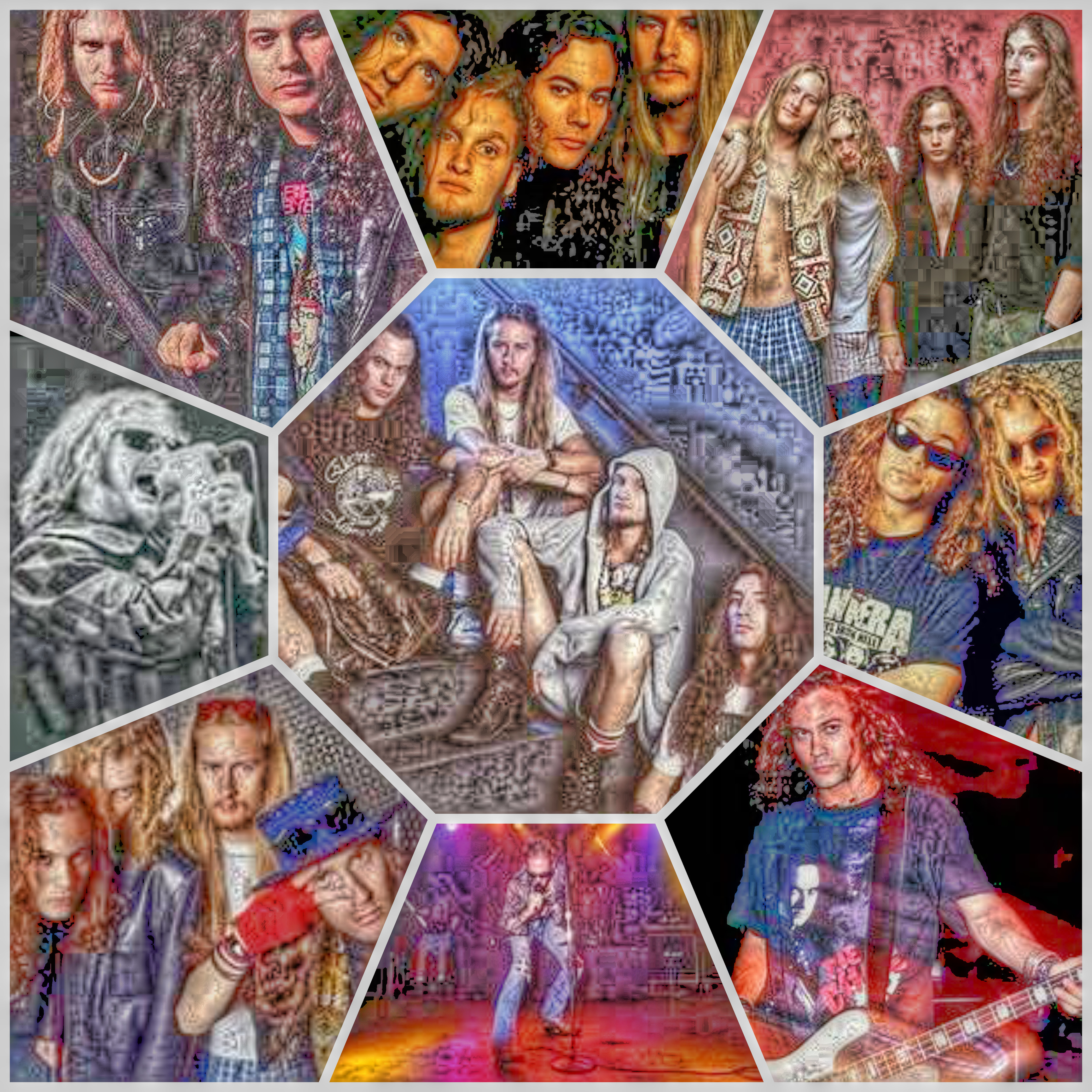 Who influenced your music? And who do you listen to now?

So, who did you listen to growing up?

Michael Starr: When I was growing up, it was KISS and Cheap Truck. Stuff like that.

Is that how you guys came to be on the tour?

Layne Staley: We listened to them a lot, and they sensed that. They called us up: ‘Hey, do you guys listen to us a lot?’ ‘Yeah.’ ‘Do you want to tour with us?’ ‘Yeah.’

Michael Starr: Sammy was into it, into the band, and we just got lucky. I don’t know how he came about it. I think it was Nick, our A&R guy. Because I remember him mentioning it once before. He was like, ‘I know the manager of Van Halen really good. I think I can get it.’ I think he had a lot to do with it.

Do you like the new band better, or the original lineup?

Michael Starr: I listened to the old Van Halen. After that, I started listening to Metallica and Slayer, so I didn’t get into the new Van Halen. But I am now. And now, I get to see him [Sammy Hagar] and watch him improve.

There seems to be a clash. I know there was a write-up in Rolling Stone about a show you did in Pennsylvania and it didn’t have a lot of nice things to say about the Van Halen tour. The suburbanites didn’t get into your music, they just didn’t understand.

Layne Staley: What did they say about us?

Nice stuff. But they said that the fans (suburbanites) are more into Van Halen. But do you think that’s changing, because you guys are on MTV?

Michael Starr: Sounds good. I mean, whoever can appreciate us.

How do you guys decide on your videos? How do you choose some guy to present you?

Layne Staley: We tell him to explain to us what he thinks, and if it’s anything close to what we’re thinking…

Okay. What about “Man in the Box”? Where did that come from? What’s it all about?

Did you think it would be banned from MTV because of the profanity in the lyrics?

Do you think MTV pushed Facelift?

Michael Starr: They pushed it.

Layne Staley: We’re going to re-release our first video. We’ve tried twice since it’s been out. I guess they have some small amount of interest.

What’s with the dead people in the plastic bags on the single cover of “We Die Young”? Some trying childhood experience?

Does the record company have a lot of say in what you guys do?

Michael, were you schooled on the bass, or did you just pick it up and learn?

Michael Starr: Just picked it up and learned.

Layne Staley: He went to Juilliard, for bass and modern dance. He had, like, a modern dance bass solo routine.

What’s your favorite song on the album?

Layne Staley: “Green Manalishi” (*Editor’s note: This is a Fleetwood Mac song and not on “Facelift.”)

What was the last album you went out and bought?

Did you pick up Paula Abdul’s new one while you were out shopping?

Layne Staley: Yeah. I have all 20 of her albums. And the home videos.

Michael Starr: I have her weight in gold at home.

What do you guys think you’ll do next? Headline?

Layne Staley: After we do our next record, we’ll headline.

If you could have an opening band, and you headlined, who would it be?

What do you think about them being in the paper every week as a result of their primadonna obnoxious behavior?

Layne Staley: Well, we’re f****** insane after selling 600,000 albums, and they’ve sold what, 12 million? They can’t even walk down the street without getting attacked.

Are you headlining smaller venues now?

Michael Starr: We do it once in a while. We’ve been touring seven nights a week.

How long is the tour going on then?

If you guys could be doing anything else right now, what would it be?

Michael Starr: I’m going to watch him whack off.