Good Charlotte‘s Joel and Benji Madden dropped their debut album as The Madden Brothers last month, titled Greetings from California, and we’ve had the first single, “We Are Done” on a near constant loop ever since.

Good Charlotte may have pulled the plug too soon, but it’s great to see the Maddens totally reinvent their brand of badass and mercilessly melodic rock and roll with the dynamic duo’s new project.

Greetings from California was released on September 19 and was inspired by SoCal (we’ve spotted the Maddens hanging Coffee Bean Sunset quite a few times) and includes enough catchy guitar hooks and anthemic choruses to keep Good Chalotte fans satiated while also pushing the band further up the charts in the pop-rock arena. 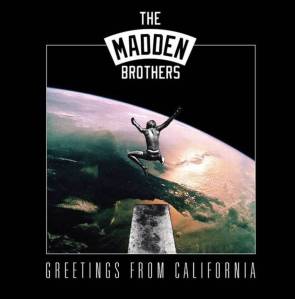 Frequent Good Charlotte collaborator Eric Valentine produced “Side 1” of Greetings from California and Joe Chiccarelli, who has worked with U2 and My Morning Jacket helmed the rockier “Side 2.”

Chart-topper Pharell Williams brings a happy, upbeat vibe to the album as a guest writer on the cool and catchy, Lenny Kravitz-like “California Rain.”

The Madden Brothers is currently touring Australia through November. Can’t wait to check out the band when its international Greetings from California tour makes its way stateside early next year.

Plus, we’ll never tire of hearing this timeless GC track…