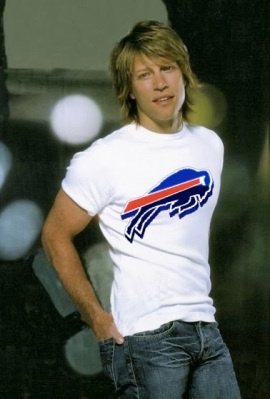 Wild is the wind that blew through sports media headlines Monday morning that Jon Bon Jovi was looking to buy the Bufalo Bills football team. The truth behind the rumor, however, went down like bad medicine for Bills fans when the Associated Press confirmed via the band’s publicist that the Bills talk was all heavy metal hearsay and that JBJ is not looking to purchase the NFL team from longtime Hall of Fame owner Ralph Wilson.

“The Bills are not for sale, and [Jon] has too much respect for Mr. Wilson to engage in any discussions of buying the team,” Bon Jovi’s publicist, Ken Sunshine, tells the Associated Press.

Sunshine, however, confirms that JBJ, a former owner of the Philadelphia Soul arena football team, is interested in one day becoming an NFL team owner. When that time comes, the rock jock may first want to get some sporty career advice from LA KISS owner Gene Simmons!