Bulldozers have been coming uncomfortably close to the huge white skeletal remains of the historic Hollywood rock club Tropicana in the past few weeks. The defunct legendary ’80s club infamously hosted female mud wrestling, championed the local metal scene before the Rolling Stone cover stories and is justifiably immortalized in Motley Crue‘s classic track “Girls, Girls, Girls.” The Tropicana is where Vince Neil said he “lost my heart” The band even posed at the club with some of the wrestlers for the 1987 album’s inside sleeve (below). 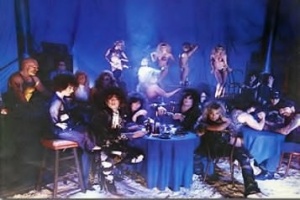 Fortunately, the current crop of bulldozers rumbling next to the club’s former location on Western near Fountain are flattening the adjacent empty lot. The old Tropicana haunt looks safe for now, but there’s no word on what’s in store for the future of the empty former heavy metal hot spot.