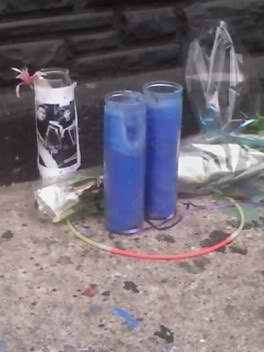 Nearly 20 years after River Phoenix died on the sidewalk outside of West Hollywood’s Viper Room, fans still leave tributes to the late actor-musician at the infamous site. The former Aleka’s Attic frontman and iconic young star of My Own Private Idaho and Stand By Me was 23 when he overdosed on Oct. 30, 1993.

Every year in late October, the walkway in front of the rock club is beset with candles, photos, hand-witten notes and other memorials. A fading graffitti message, shown above, is scrawled on the pavement outside the venue’s side entrance.